When I was younger, I remember getting some candy that looked like M&Ms.  I was very excited until I began to eat them.  They were nothing like M&M’s!  Impostures!  The chocolate did not taste right and I knew I did not want those again.   I told my Mom it was fake chocolate and I did not like it.  We can typically discern between something fake and something real.  I can tell the difference between a bunch of fake flowers for decoration or real flowers from the garden.  When I go shopping I know the boots made out of leather and which ones are synthetic.  Heck, we even can tell when someone is real or fake, right?!  And it’s deceiving!  But I thought she was…

And that’s a lot like food these days.  They’re in disguise!  Many foods come across as “real” and “natural”–good for us even, but they’re not.  Why?!  What happened?!  I’m pretty sure this didn’t used to be an issue.  My Grandmother looks at me cross-eyed when I talk about buying organic.  She doesn’t get it.  It’s because she didn’t need to in all her years!  All the hormones, pesticides, and packaged items were much, much less (as were portion sizes but that’s another story!).  Whether it’s a marketing claim or a simple assumption, these days it’s easy to eat foods that would not be recognized as foods just 50 years ago. 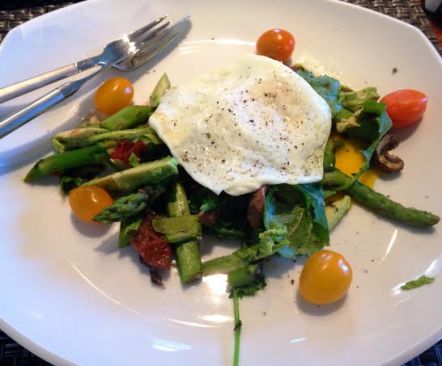 Marketing, hype, labeling, packaging, wording, logos–all of these tactics are used to convince us that a product is worthy of consumption.  Some are just darn good and we don’t really care if it’s good for us or not, and that’s OK in moderation, but convincing us it’s healthy is quite different.

Here’s the problem: our bodies know the difference.  Our liver recognizes and can process real food properly, and the rest it cannot.  The similar case for our gut.  We get inflammation, bloating, discomfort, and many other things (you know what I’m talking about) because it’s able to distinguish between what is good for it and what’s not.  The only way our body can inform us is by giving us those signals but it’s easy to ignore when it’s oh-so-good or simply just the norm after awhile.  Our stomach and other organs don’t know about marketing, deals, super-sizing, and two-for-ones.  Two-for-one is great when it’s a free ticket at the movie theater, not so much when it’s a hamburger and you’re the only one eating.

Here are the biggest red flags when you see it on a label: 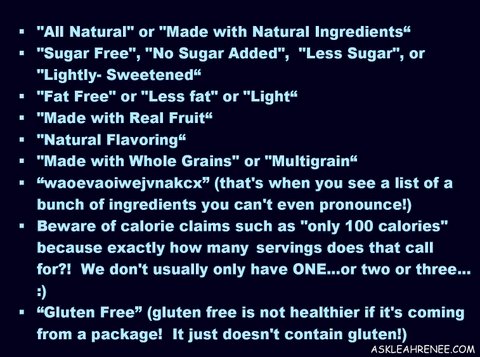 What do all of these have in common?  People, companies, and corporations are changing food which meet the criteria above.  If you eat real fruit, it’s not going to have a label on it reading “made with real fruit”.  It’s simply fruit.  And guess what?!  Fruit contains sugar–and it’s still good for you.  Because it’s real.  It contains antioxidants and fiber and vitamins and mineral our bodies recognize and need.  That’s what “real” or “whole” food is.  It’s in its purest state.  The further we get from that, the less “real” it becomes.  Why eat fortified foods (when companies add protein, fiber, or vitamins and minerals) when you can get it from something else healthier and equally enjoyable.  Fortified bread is only fortified because it’s been stripped of the nutrients it originally contained.  Think white rice versus brown rice; brown rice has its outer layer in tact where the fiber is.  Take it off and you get the inner white portion that does not contain the same amount of nutrients (i.e. fiber, etc.).

Not all labels lie.  It’s a matter of staying informed so that you can decode which ones are deceiving and which ones are legitimately healthy. Knowledge is power.  Even if you are choosing to eat some of these foods sometimes, at least you know what you’re consuming.  The closest you keep to how the food looked and tasted when it was picked, grown, sprouted, and caught, you’re good.  Mindfulness, moderation, and a little mastery!

I find that my weight fluctuates a bit, but I don’t like to obsess constantly about exactly how many calories I’m eating.  Isn’t it enough to just eat healthy most of the time?  I like to go out and have a good time with friends, and that usually means eating and drinking too.  Is this all adding up to more than I think?  –Alexa, CO

Small amounts of anything have the ability make large differences in the big picture.  Each day, we make choices that have the ability to impact the way we look and the way we feel– both emotionally and physically.  We can have a little too much each day, exceeding our caloric allowances which makes us put on pounds and feel icky, or we can choose to pass up those little snacks, temptations, or over-eating at a meal just because it tastes good.  If you ever said, “I just want to taste it, have a bite, I’ll share with you, or just give me a little bit, please?!”   We make ourselves feel dainty or think we’re only having small amounts when in actuality we could be having the equivalent of consuming the slice of cake we opted against in the first place.  Calories are calories and by having a “little” here and there, it all adds up at the end.

Our diets are kind of similar to our bank accounts.  It’s wise to remember what your balance is before you go overboard.  A little here and there has the potential to deplete what you worked for.  Going to the coffee shop each day for your coffee rather than brewing your own at home adds up to a lot at the end of each week, month, and year.  So does reaching into that bowl of chips while socializing with friends.  One at a time; one’s a small number!  It becomes a lot larger when you multiply it by 20… or 30.  It’s amazing how much you can really power through while chit-chatting. Choices made on the other end of the spectrum work the same way!  Passing-up makes as much of a difference as giving-in.  Each time you forgo that trip to the coffee shop, the more you’ll save and have to spend on something you may have been wanting for a while (you know, like that pair of shoes).  The same goes with that bowl of chips.  You can get a small plate and put some on there so you know how much you’re actually eating, or choose something else instead (or don’t eat if you’re not actually hungry).  Save those calories for that dessert or meal that you’ll end up craving at some point or another.  We only get a certain allowance each day, and we must budget accordingly.

Unfortunately, drinking can also be a major contributor to overdoing your daily allowance.  Knowing what you’re working with in the first place as far as what drinks contain the least and most amount of calories helps.  It becomes more like second nature when you’re familiar with what the things you typically have contain, and what your daily allowance actually is.  Then you don’t feel like you have to be a mathematician or obsess all day about each little thing you consume.  This past post highlights what drinks have what calories and the best way to pair them up.  The easiest way to know how many calories you can have each day is to multiply what you want to weight by 13.   If you’re active, then multiply by 15.  If you’re really active (like burn it up each day of the week), multiply by 20.  Just by knowing this information I feel like you can relax a little because you’re aware.  The rest is easy, well, sort of.  You don’t have to give to much thought about eating an apple, having a veggie omelette, or some shrimp with cocktail sauce.  If you are having something you know is high in calories, like something fried or soaked in sauce, then it’s the volume (and frequency of which you have these foods) you should think about.  For instance, if I meet up with friends at a Mexican restaurant, chips happen.  So, instead of ordering a meal on top of that, I look at what side dishes they have to offer.  I mean, if you ordered a bunch of appetizers at a meal you wouldn’t go on to have for a full course meal, and chips with salsa (or guac) are an appetizer just the same.  Go for a side of black beans and veggies for your meal, or ceviche.  Even the salads can be deceiving because they usually have sour cream, cheese, rice, and loads of other things in there.  If it’s a sushi dinner you’re going out to, pick just one roll you want, and then if that’s not enough, fill up on veggies/salad, sashimi, edamame, and/or miso soup. 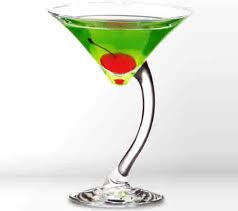 Simply staying conscious and mindful of EACH choice you make is the BEST way to live up to your own expectations.  Let’s face it, nobody else can make these decisions for you nor will they have to pay for it, or reap the benefits of it, later.  Remember, a little goes a long way.